On Creativity, Interview with a Woodcarver – Part II

On Creativity, Interview with a Woodcarver – Part II 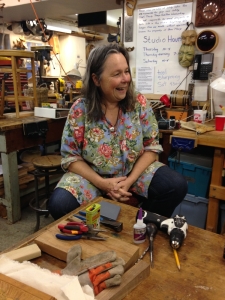 “One of things that we have in my studio, is that we don’t make mistakes, just design changes. Some of the very best projects are ones that have changed direction because of a mistake.”

The First Part was emailed on Feb. 4

A few weeks ago, Karen LeGault, art camp director and a painting teacher for many years, and I had a chance to sit down with woodcarving instructor Sheri Tharp in her sunny Berkeley studio. Sheri is offering a Woodcarving class at Art Camp this year.

A: Can you describe one of your workshops and sort of how it manifests? What people could expect? What you might teach at Feather River?

S: Let me first describe what happens in my studio here. What I have here is pretty unusual in that I have mixed ages and mixed skill levels. So, you could have somebody that was just starting out and only carved for an hour sitting next to somebody who’s been carving for twenty years. You have that and you have the 80 year old carving next to the 8 year old. It’s really great because you get a lot from just being in that kind of atmosphere that you wouldn’t get otherwise.

Sometimes I’ll look in carving magazines and I see pictures of classes and there are a lot of old guys with white whiskers and they’re all holding these pieces that look exactly like the instructors. And that would just bore me to death. In my class everyone does the grapes and leaves. But what I try to do is even though everyone is carving the same project, I will emphasize different things for each student depending on what they want to do. 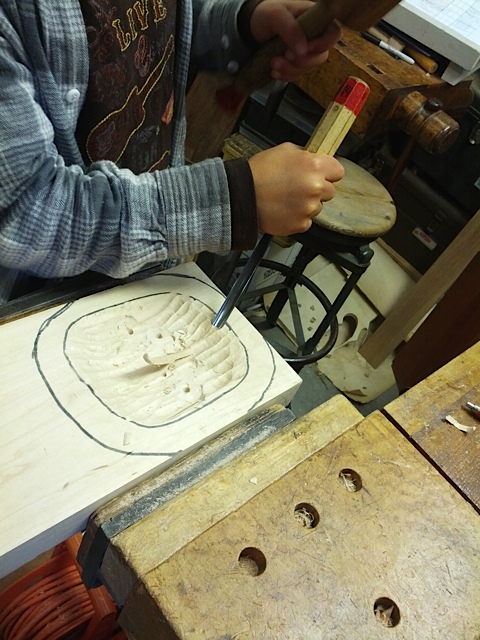 So if somebody wanted to do sculpture, when they carve their relief carving, I would emphasize them taking away a lot of material. Being able to get some volume to the grapes. Whereas if somebody was coming in and wanted to do little tiny intricate figurines, I would much more emphasize control, taking the materiel off carefully. So, even though t

hey are doing the same project, there’s very different things that you can emphasize, even though everybody does do the grapes and leaves.

Because what it does is it gives the students that first overview that is not intellectual that they’ve actually experienced it. And it gives us a common vocabulary. Because I cannot tell you how many times I say to students, even Lorraine, who’s been with me for 22 years. It’s just like a grape. Remember when you did the grapes. You round it up the grain direction, you treat it just like a grape. When you round everything, you’re dealing with those same kinds of issues. So you’re rounding the grape here, each one of these grapes you’re doing this many cuts in this many very specific directions and that has to do with how the wood comes off smoothly. 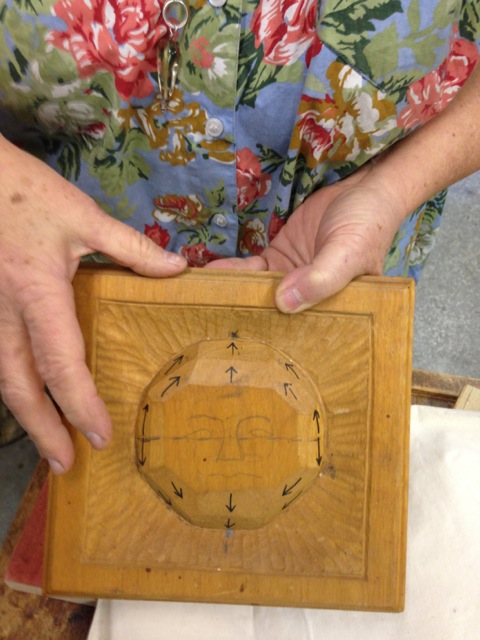 So, I’ve got this so here, you can see on this that if you took your fingernails and went like this, you’d feel like it wasn’t catching. If you go like this, your fingernails catch. That explains the grain. When you’re doing something that’s nonlinear, you’re still having that same kind of thing happening with the grain direction. But here we go, this is like the top of a grape. It translates.

As they’re doing their grapes and leaves project, I try and have them thinking about what they want to do

next, after they have done their grapes and leaves. At the Feather River Art Camp, there’s going to be a limited number of options. Because I won’t be able to bring every possible chunk of wood and configuration. So they’ll be a few things that people can choose from. And within those there’s lots and lots of room for creativity.

K: It’s probably a good chance that none of the people will be as advanced as you have here.

S: I’ve had students that are very, very beginning students and they can do fairly …you’re second project can be pretty, most of the time people can do pretty good stuff. It’s pretty amazing actually. So I did a week long workshop at Anderson Ranch in CO and one was with little kids, 8-12 and one was with teenagers, 12-17 and in that it was kind of similar, when we did grapes and leaves first. With the little kids I have a flower, sort of a smaller version.

Again, it teaches them just to use ..the basic tool use. But we had … I could actually send you some pictures of both of those workshops. The little kids actually did really great projects. Both groups did really great projects. The little kids their second project was a mask, and the older kids, their project was a staff. And they all turned out really good. And we did that within a week long thing. They all got everything done. So I think that’s probably similar to what’s going to happen. There will be different projects.

A: Do you find that people are coming to your workshops and having a notion, someone who wants to do sculpture or intricate things, or do people not know what they want to do.

S: Everything in between having a very specific thing and somebody not having a clue. Everything in between. And if you don’t have a clue, that’s absolutely fine. All you have to do is you want to carve. I have so many ideas that in ten lifetimes I wouldn’t be able to carve them all. So it’s great being a teacher because you can go, “ohhh here’s an idea, what about this”. So if I can’t carve it, the next best thing is having a student carve it.

A: Your minions! So this is your first time teaching at Feather River Art Camp?

S: Yes. I met Karen, briefly, quite a few years ago at a party. And, we sort of exchanged emails and I’ve gotten her email newsletters. And then my oldest friend became one of Karen’s students. Coincidentally. Totally separately.

K: Here’s a funny story. Sheri and I have been Facebook friends for a while. She doesn’t post very often.But, last year I was scratching my brain, thinking, “I need a new teacher, I don’t know anybody, who can I get?” it was too late, but one day on Facebook I saw that she had posted a thing about her class. And I thought, “Why didn’t I think of Sheri sooner!”

K: So the plot thickens!

S: I find wood carving really, very rewarding. You’re really…when you’re carving, you go into this altered consciousness and all of a sudden, you go, “Oh my god, three hours have passed, how did that happen?” it’s like a physical meditation.

For what it is. You meditate. You’re sanding the wood or you’re cutting it or whatever you’re doing. It just transports you to an alternate reality. Which is like so much better than…it’s getting in touch with how things are made is really exciting.

K: that’s good point. The hands-on really appreciating how things are made.

S: it’s like we don’t know where our food comes from anymore.

S: and furniture comes from boxes from Ikea. There’s something that’s really rewarding about being able to get back to how things are made. Chicken doesn’t come in Styrofoam boxes. You can eat out of a bowl you carved out of wood.

A: it’s like it taps into something ancient, really. It makes me wonder if that zone you go to is like generation after generation of humans doing this. It’s kind of a natural thing to do, historically.

S: it makes you wonder about past lives or the power of our DNA.

S: all of those things. It’s really wonderful to see someone get in touch with the wood. Really connect with that piece of wood.

A: Because it’s a living thing, or recently deceased. It’s an organism. It’s really special.

K: I found the discussion really interesting, the difference between working with the students and your own work. Your own work being a random place. And then later you said being able to be in a zone. To me it’s like, when you’re with students, you’re always aware of them. Even though it’s expansive, there’s kind of a limited space that I occupy to stay in the same world with them. When I work on my own, I open up and anything can come in. And that’s for me, why I needed to stop teaching for a while so I can take a next step for myself. I was holding myself back in that world of needing to be there where it’s safe for people.

S: I see that, but for me, because of the group I teach with. I have some people, I can go to that “out there”. Because we have such a long history together. I understand what you mean, though. I feel like that a little when I’m working with kids. You have to protect them a little bit more. You can’t nudge them like you can with an adult.

K: I get that too, because I’ve had a really advanced group I’ve worked with for a couple of years. It’s sort of still maybe like music, where you’re all making music together. But I kind of lost touch with my own needing of a different type of exploration. You know, to get away from them. It’s weird.

S: Well, yeah. You get as an instructor, you get influenced by what’s around you a lot. There are times when you need to protect yourself a little bit.

A: Sort of like what you’re saying with music. Like playing in an orchestra and composing.  You can’t really c