“Your Own Mistakes Are Your Best Teacher”
Oakland Feather River Art Camp adds a new instructor
and an ancient art form to its 2018 roster. 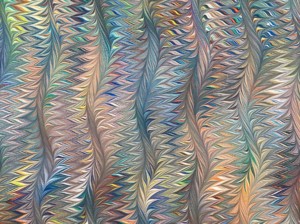 You’ve probably seen marbled paper on the end-pages of precious, classic edition books, or in the lithe and lively patterns of high-end, decorative art paper. It’s an ancient art form that, until a century ago, was a jealously guarded secret. Today, its deceptively simple process and techniques are more accessible, and Oakland Feather River Art Camp is proud to offer a week-long study with accomplished master of the form, Pietro Accardi.
Paper marbling, Pietro points out, is almost as old as paper itself, and emerged as an art form in China and Japan. Over centuries, it gradually spread and evolved, especially into the Islamic civilizations, like Persia, where it achieved special glory. Venetian traders of the Middle Ages who plied the Silk Road, like Marco Polo, brought marbled paper and cloth home with them. Europe was intrigued, and began to experiment with its own approach to marbling. 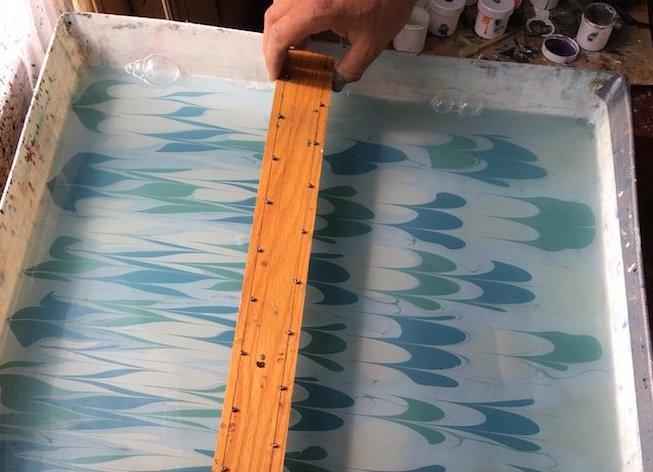 “The Western approach is so different from the East,” explains Pietro. “In the East, it’s more of a meditation and observation, with little or no intervention of the mind. In the West, the mind wants to control everything, manipulating the materials, making things more complicated to please the eye.”
Indeed, as Europe became more and more enamored of complex patterns and techniques, the art of marbling produced a specialized class of professionals. By the 16th and 17th centuries, guilds of these professionals kept the process secret to protect their livelihood. They succeeded almost until the 20th century.
“Today, there are no more secrets,” Pietro laughs. In fact, he himself is mostly self-taught. Growing up in Italy, where his father had a printing shop, he was surrounded from an early age by all kinds of paper. He learned bookbinding, box construction, and most of the skills of the printer’s trade. One Christmas, he was gifted with a kit that introduced him to the art of marbling, and a lifelong passion was ignited. 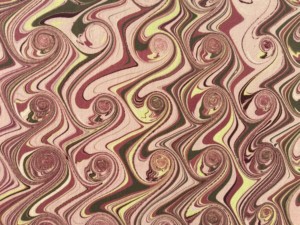 “I had all this paper around me,” he says, “so I practiced and experimented. That’s when I realized that your own mistakes are the best teacher.” While that philosophy still guides his approach to teaching, his students will also gain the advantage of Pietro’s own experiments over decades of work.

Morning classes will focus on the three main components of the art-water, paint and paper-with hands-on demonstrations. The water needs to be thickened to just the right degree; while various methods are used today, Pietro’s preference is to use carrageenan, a seaweed derivative commonly used in food production, for example, to thicken ice cream. Paper needs to be sized with alum, to best accept the paint on its surface. Then there’s the paint (Pietro uses acrylic): How much is enough, or too little? How does it behave while it floats? What can be done with a brush, or rake, or comb, to achieve different designs or effects? 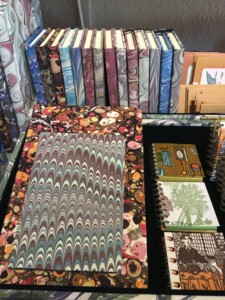 Then there’s the delicate procedure of lowering the paper on to the floating paint, to capture the image permanently. (Pietro anticipates that, once students become proficient with paper, they’ll be able to graduate to fabric.)
Sensing a bit of an alchemist’s magic?
Afternoon sessions will be unstructured, allowing students to experiment and explore, under the helpful eye of the master.
“I want my students to believe in themselves,” says Pietro.
“That is the best approach to learning.” 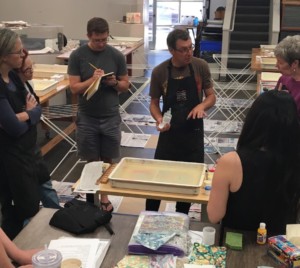 Pietro explains the intricacies of marbling.

He points out that there are about 50 classic patterns in common use in marbling today. Each has its own set of rules, and he’ll demonstrate some of them. But the importance of learning these rules, he explains, “is to break them, as you please. We waste too much effort on judging ourselves. Confidence gives you the freedom to explore, to express yourself. We each have our own aesthetic.”
By the end of the week, Pietro expects his students will have a fair collection of handsome paper designs, unique fabric, plus boxes and a bound book of their own. But most of all, “I want my students with the skills they need to move forward on their own. I teach them to ride the bicycle. Where they go is up to them.”